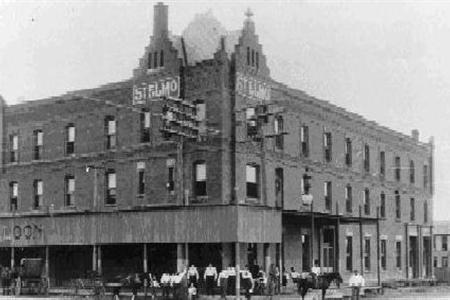 The St. Elmo Hotel was built in 1892, a 3 story brick building on the corner of Bridge and Omega streets, by Colonel Pete Snearly and his wife Catherine McCuen Snearly. Catherine’s mother Margaret, had run the City Hotel, a wooden structure that the Snearlys moved to the rear of the lot and renamed Denver Hotel to make room for the new St. Elmo. The new hotel was a little late for the main rail traffic because Wichita Falls had built the rail yards and become the shipping terminal of the area. Still Henrietta was a stepping stone to Ft. Sill for Army wagon trains crossing the Red River at Benvanue, and the hotel was the civic center for Henrietta and the surrounding area of cattle ranches.

In the late ’70s (1870’s) Colonel Snearly made two treks on the Santa Fe Trail. In Arizona and New Mexico he tried mining and sheep raising. Once he and a friend were herding sheep on a mountain, and watched a tribe of Indians destroy an entire white village below. These two sole survivors later missed one of the watering places and almost died of thirst. In Colorado he saw the little mining camp of St. Elmo, where he was working, wiped out on a summer thunder storm. This made such a vivid impression on him that he named his new hotel St. Elmo.

The hotel became a sort of social center, the gathering place for cattlemen. Some lived at the hotel and went out to their ranches early, and came in about the middle of the morning. They congregated in a circle in the lobby until noon. Then they either went home for lunch or ate at the hotel, took naps, and then returned to lobby until time to go home for supper. The newspaper was weekly but news was daily at the St. Elmo. The hotel was also a meeting place for civic groups such as ladies study clubs, missionary societies, a “42” domino club and PTA meetings.

Guests might be cattle buyers, Army officers, theatrical people, musicians or lecturers playing at the Kane or Graner Opera House. Also a constant stream of drummers who rented the two rooms on Omega, which were built to display their wares.

Bridge Street (Ft Sill/Ft Richardson Road) was either knee deep in dust, or knee deep in mud from the constant traffic of wagons drawn by 8 horse teams moving from Ft Sill to the railroad.

Some names appearing on old registers of 1889-1890 include; President Grover Cleveland, who as a crusader for Indian rights had likely come to look at conditions at Ft. Sill; John Wanamaker, eastern business tycoon and Postmaster General under President Benjamin Harrison, and originator of rural free delivery and parcel post; Jay Gould, railroad magnate made two stops; John L. Sullivan, Heavyweight Champion of the world stopped twice.

Quanah Parker, last war-chief of the Comanche was a frequent visitor. He once represented his tribe at a pow-wow with John H. Reagan and Governor Stephen Hogg in the hotel lobby.

Travelers getting off the train in Henrietta were met at the Depot by a horse-drawn transfer owned by Dave Utley and Doc Clisbee. One of the first sights likely to be seen, was a group of friendly Indians sitting on the edge of the sidewalk eating watermelons while city cows munched on the rinds. When the transfer pulled up it was met by Sam Willis, the negro porter, who was there to do his utmost to make the travelers stay memorable.