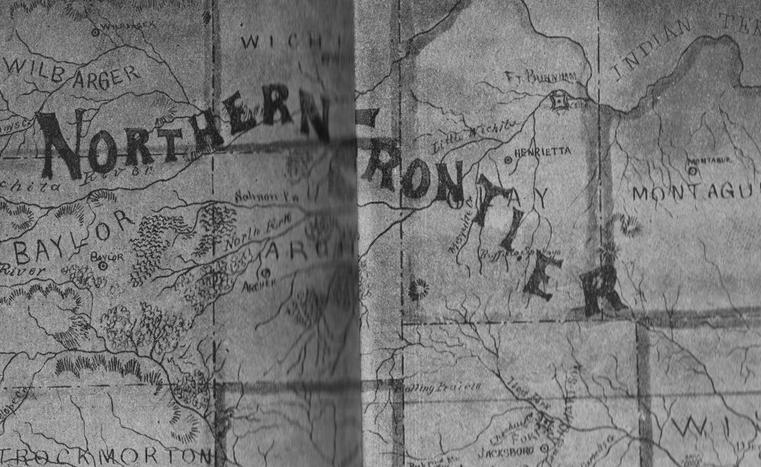 The map shown below, is on the inside cover of Katherine Douthett’s book “Romance and Dim Trails”, and was given her by Mrs. St. Andrew Myers. This map locates Fort Burnham at the mouth of the Little Wichita River in northeastern Clay County.

An old manuscript written by Father Fray Augustin Morfi, was located in a monastery in Mexico City, Mexico. The Father was commissioned by the Viceroy of Mexico, to make an exploratory trip through Texas, and the manuscript, written about 1745, was a description of that trip.

North Texas and the Clay County area were populated by Indians then. The Spanish apparently built a mission named Presidio San Theodoro de los Taovayas, named after Theodoro de Croix, and a large tribe of Indians living nearby, the Taovayas.

Both Father Morfi’s book and Mrs. Douthitt’s map show the mission and fort in the same location.

Apparently the fort was started as a mission and was named by the Spanish, abandoned and later renamed by later pioneers. Even in the 1800’s settlers had no recollection of it or it’s location.

An old settler told Troy Douthitt Sr. that there were rock ruins on a hill near the mouth of the Little Wichita River, possibly the remains of the old fort.

The Record News sponsored a search involving a group of Midwestern State University students in the 1950’s and Congressman Frank Ikard assisted by looking for information in the records of the War Department in the National Archives, the Barker Texas History Center, and the U.S. Army Register. Nothing was found.

In 2010, representatives of the Clay County Historical Society, with the kind permission of the landowners, examined parts of the Clark Birdwell Ranch, and what was then Lone Star North, for possible ruins, with no success.