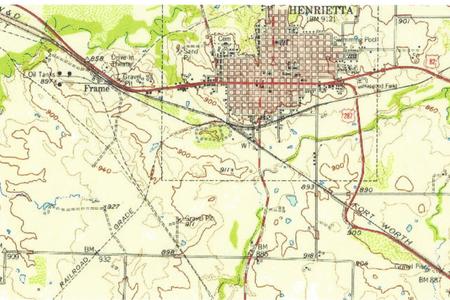 Businessman Joseph A. Kemp, was working hard to make Wichita Falls a major rail center. He tried to convince the KATY Management to extend their line into Wichita Falls. They did not want to duplicate existing rail service between the two towns. However, they agreed to operate the line if someone else were to build it. Kemp and other investors founded the Wichita Falls Railway and built a line parallel to the existing F.W. & DC line, using the same right-of-way. This line was completed in 1894 and the KATY Management signed a long term lease to operate it.

In 1907, the Southwestern Railroad began to build a line from Henrietta to Archer City. The first leg to Scotland was completed in 1908, and the remainder to Archer City in 1910. The route never proved profitable, since Kemp and his partner Frank Kell built a competing line from Archer City, direct to Wichita Falls, a much larger rail center. The Southwestern was abandoned in 1920.

Rail service on the KATY steadily declined and the line was abandoned in 1970.