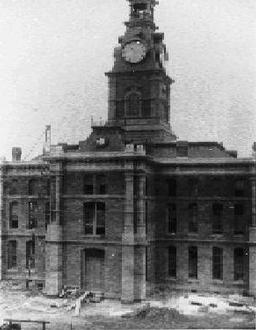 Clay County was first organized in 1857 from Cooke County, and later abandoned because of Indian raids. It was reorganized in 1873. First taxes; .05 cents per $1000 on real & personal property for roads and bridges; .10 cents per thousand to build the courthouse and an annual $100.00 retail tax on liquor by the drink.

First District Court was held in a frame building south of the current courthouse (corner of Bridge and Omega) in 1874 to try Chief White Horse for killing a Mr. Koozier in 1870. The Chief was absent from trial and was never apprehended.

The courthouse originally had a tall cupola or spire with a clock. It was said to be tall enough to be seen from the Red River. The tower and the clock were removed in the early 1900’s for fear it was too heavy for the buildings foundation. The building was made of red brick with sandstone columns. The brick was fired locally from clay from the northwest side of town. The interior was completely paneled with pecan wood. At one time there was an iron fence with a chain outside for hitching horses. Until television, the courtroom was the town’s primary entertainment. Everybody, even school classes on field trips, sat in on trials. Until a few years ago there was still a domino room in use on the third floor.

At one time it housed all county offices except the County Extension Office and the Sheriff. It is Courtroom 1 of 3 in the 97th Judicial District.

The courthouse and especially the lawns, have the greatest use during the three days in September for Pioneer Reunion. Local vendors sell sodas, hot dogs, ice cream and chances on everything from quilts to cookers. The Clay County Historical Society, and many artists and craftsmen will set up displays to advertise their facility or sell their wares.

This is followed daily by a parade and rodeo. Many of the Queens dresses have been donated to the Museum, and are on display on a rotating basis, with the hundreds of other items that have been received by the museum.