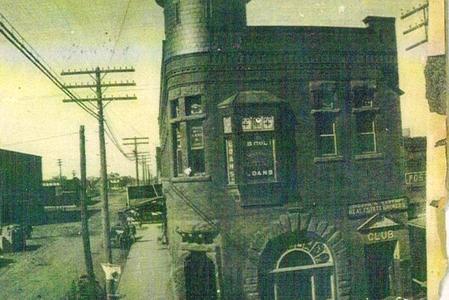 Sometimes an old newspaper article helps to uncover a forgotten piece of Henrietta history. On December 19, 1889. Mr. John Eustus sold a piece of property located at the corner of Bridge Street and Omega Street in Henrietta, to two men named Squires and Snearly. It was on this property that the beautiful building that became known at times, as the Commercial Building or the Gates Building, was built, about 1892. At various times it housed the First National Bank, an Assay Office, a Recreation Hall, a Chiropractor and an Antique shop. The following article is from the Wichita Falls Times newspaper dated November 14, 1958, and is reproduced here with their permission.

One of Henrietta’s landmarks, the Gates Building at Omega and Bridge Streets, was torn down Thursday with about 200 onlookers. A modern building will be constructed on the site. Last tenants of the building, which was built in 1892, were a recreation hall, a chiropractor and an antique shop, according to Rex Gates, owner.

The building was the most elaborate structure in Henrietta, and probably in Clay County when built. Gates said it was designed and built to house a commercial club. Millwork for the brick and stone two-story and basement structure was custom built in St. Louis, MO, and the stonework was custom cut in the county. Four wood-burning fireplaces were included in the original plans, hand-carved and designed especially for the building. Solid brass hardware adorned all doors.

Gates said the building was considered unsafe, since the original sandstone blocks used as a foundation had deteriorated badly, and the walls were in danger of toppling.

An interesting sidelight on construction of the building is the fact that the stoneworker received $.25 per hour for setting the cornerstone and arch work over all windows. One stone, estimated to weigh about five tons, was set at a height of 10 feet above the sidewalk. The stoneworker was John Schwend, grandfather of Henrietta businessmen Jess, Glen and John Cunningham. Wages paid are listed on the abstract, since a mechanic’s lien was necessary for the builder to collect for his work. All labor was itemized on the lien.